AGM is an all occasion entertainment company servicing the Okanagan. Get Live Acoustics, Band and DJ for your wedding or event all for one low price! We travel the valley playing Osoyoos, Penticton, Kelowna, Vernon, Armstrong, Salmon Arm, Kamloops, Revelstoke AND the band will even travel throughout Western Canada!

AGM is a four person team lead by Aaron Gordon consisting of multi-talented musicians making up the House Band "Three Scotch In". Each member of the band is able to run sound, DJ and of course, make amazing music. With a 200+ song catalogue, authentic energy, stunning vocal harmonies and the multi-talented nature of the group, you get a totally dialed in experience. 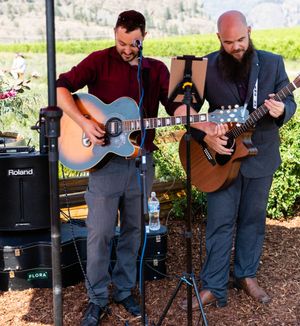 AGM has been running events and performing for weddings since 2011 officially becoming a fully fledged entertainment company in 2014. Growing largely on referral in the early years, today AGM entertains at 40+ events/year and participates in a variety of charity events such as PAWS It Forward and The VJH Hospital Gala in 2019.

No matter the crowd, Aaron Gordon Music will exceed expectations.

Aaron's catalog is being brought in to Three Scotch In one at a time. Below you will find some of the unreleased songs from when Aaron was a Solo Artist.